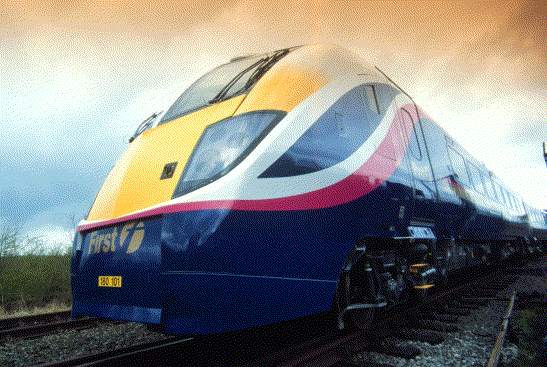 This high-speed diesel could be the successor to the much-respected inter-city 125 trains, which have run on Britain's main lines since the 1970s. The 125mph class 180s are the product of an £80million investment by First Great Western and should provide a train every 30 minutes between London and Cardiff by May next year. Instead of a power car at each end, the 180s have a Cummins diesel engine under each of the five coaches The steel bodies were built in Barcelona and the bogies in France. Each coach is air-conditioned and will have one lavatory, compared to two in present HSTs. There will be racks for six bikes, again less than current HSTs. We will have to wait to see if the 14 new trains on order prove comfortable. Of course, if the Great Western had been electrified as it should have been by now, new trains could have been travelling at 180mph.

Midland Mainline has responded to complaints of cramped and overcrowded conditions in its new Adtranz-built Turbostars by ordering £10million worth of new coaches, so that its two-car sets can be boosted to three cars. That could allow MML, which has attracted a million extra passengers since the Turbostars were introduced in May last year, to improve the internal layout.

Worries have also been expressed about the new Virgin Voyager trains featured in Railwatch 83. Standard class Mark 3 carriages have 64 face-to-face seats at a comfortable pitch of 1065mm, writes Peter Phillips. In Mark 4 carriages capacity was increased to 74 seats by introducing 42 unidirectional aircraft style seats with a pitch of 820mm, and reducing the remaining 32 facing seats to 945mm. The Mark 4s were criticised for being cramped, but the new Virgin trains will have only 16 facing seats in standard class with a 955mm pitch, and there will be 46 unidirectional seats. Despite this, seating capacity will only be 62, two less than the Mk3s. This is because of a huge wheelchair-accessible toilet, which uses up the space of six seats. There will be three of these toilets in the four-car train so there will be only one toilet for every 63 passengers. This compares with one for every 32 passengers in the Mk3s and one for 37 in the Mk4s. Just who was consulted when these trains were being designed? Certainly not the passengers.

This site does not use its own cookies, although Google Analytics does. Hosted by TSO Host (cPanel) and maintained for Railfuture by Billing Specialists Ltd.