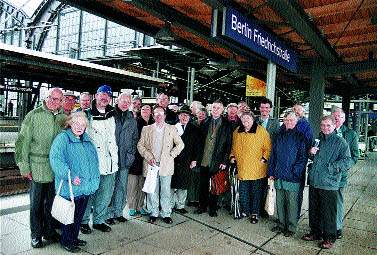 The Channel Tunnel and German unity brought London and Berlin closer by train. Indeed, it is now possible to do the journey between the two capitals comfortably in one day, changing at Brussels and Cologne.

RDS members took part in our longest and most ambitious visit abroad so far - to Berlin on April 10-16.

As the majority of those who took part lived outside London, we left Waterloo International on the 12.27 Eurostar to Brussels.

We saw work in progress on the Channel Tunnel rail link in the Ashford area. Between Brussels and Leuven, and between Aachen and Cologne, we could see the ground being cleared for four high-speed tracks to be laid.

After an overnight stop in Aachen, we boarded an ICE high-speed train at Cologne. We were impressed by the speed of this sleek white train and the smoothness and quietness of the ride and the quality of the catering which was better than Eurostar.

Our ICE train travelled over the newly rebuilt main line via Wolfsburg and Spandau. During the division of Germany, the route was downgraded. After unification in 1990, this straight line was electrified and by 1998 brought back to its former glory.

At Berlin we were met by German Railways' public relations manager Holger Prestin who gave our party complimentary tickets and useful literature.

The following day we sped by double-decker regional train to beautiful, historic Potsdam where we had lunch at the German Railways' regional headquarters, followed by a fascinating presentation in English by regional director Hans Leister. Some challeüges which German railways face are similar to those of any rail system carrying commuters and visitors into a major city. But the particular social and economic issues involved in reuniting two halves of a divided city and their surrounding region have also had to be tackled.

Many successes have been chalked up, such as a five-fold increase in business since 1993 on the east-west route between Berlin and Frankfurt (Oder). Now the emphasis is on north-south traffic, for which a new tunnel is being built under the city. Herr Prestin took us to the sites of two new stations.

A remarkably good-value day ticket for the Berlin area costs about £2.50. Two interesting and enjoyable evenings were spent with Jurgen Czarnetski and colleagues from the regional branch of Pro Bahn - the German equivalent of RDS. Our discussions ranged from the fragmentation of the British network to the need for reform of the fiscal system to ensure a more even playing field between rail and other modes of transport.

Members of the RDS party also found time to do a remarkable range of other things. Jim Walker took a group by train to visit an airship works, Maurice Wilkinson furthered his interest in gas lighting, Eddie Stock went to the opera, Walter Wright visited ‹erlin libraries and archives researching his new book and Paul Meitner discovered a road named after a distant relative - Meitnerstrasse.

Travel and insurance were handled by Peter Cannon of Travel Cannon Ltd, Station House, Saxmundham, Suffolk IP17 1BW. Tel: 01728 604600 Fax: 01728 603199. He is pleased to offer a full rail ticketing service to RDS members, for individual and group travel in this country and on the Continent.

Ideas are already being suggested for further RDS visits using Eurostar - including a possible return to Berlin. Further suggestions and offers of help from any member or affiliated group would be welcome.

Member Walter Wright has published There we'll meet again, his own translation of the First World War diary of German girl, Piete Kuhr. It is available at a special price of £8.50 to members of RDS (normally £9.75) from him at Oakdene, Fidges Lane, Eastcombe, Stroud, Gloucestershire GL6 7DW. Cheques payable to Walter Wright.

This site does not use its own cookies, although Google Analytics does. The site is maintained for Railfuture by Billing Specialists Ltd.